I am new to Coolector and so far am very impressed. I am running into one issue though and hope that it's simply that I couldn't find a solution searching the forum.

I actually want to KEEP my duplicate movies when I import them. I have a good number of movies that are on different media (DVD, BD, 3D BD and possibly 4K BD) I want to add all of them to my "owned videos" database. I want to use Coolector to not only help me choose a movie to watch, but to tell me where the disc is located, so I need all the different versions to be imported. Is there a way to do that? I can't find one.

I created XML files that mimic your database file format and then used "Tools/Import/Import from Coolector Movie Database XML File" to import my collection.

BTW, I did notice that once I fixed the movie titles that it didn't recognize it DID add those in even though they were duplicates. It actually helped me with this issue, but i suspect that you probably don't want that behavior since you try to remove all duplicates. I suspect you only check for duplicates when you first run the import script. Just thought you might want to know.

One final question, can I request that discs of music videos be added to the database? I know you don't allow concerts, but since these are full discs and are listed in IMDB, I wonder if they're allowed or not.

Thanks for your help.
-Paul
(cool) Hector

PAFDenver wrote:i suspect that you probably don't want that behavior since you try to remove all duplicates. I suspect you only check for duplicates when you first run the import script.

If there's an issue, it has to be with your import file. Are you importing from another app? Which one?

PAFDenver wrote:I know you don't allow concerts, but since these are full discs and are listed in IMDB, I wonder if they're allowed or not.

How many titles? I can be a little compliant, but I wouldn't want to be inundated with concerts...
PAFDenver

Thanks for your help Hector, but it's not the behavior I am seeing. I just ran a test and I definitely am not seeing the duplicate movie being added.

I wonder if it's because I did the import in multiple stages. I didn't want to deal with verifying all 1700+ titles at once, so I imported about 100 titles at a time. It looks like the movies that did not import were in later files - after the title had been imported in an earlier file. My description of the test should clarify what I mean.

Here was my test:
-Look for "The Mummy" in my collection - I have 2 owned videos, DVD & HD-DVD
-Verify in my XML file that the Blu-Ray for The Mummy exists (it does) - see TheEnd.xml
-Import the XML file into Coollector Tools/Import/Import from Coollector Movie Database XML File
-Verify The Mummy is in the imported file list. It was found in the "Already Imported" tab - see AlreadyImported.jpg
-Click the "Import the recognized movies" button
-Look again for "the Mummy" in my collection. It still shows just 2 owned videos, the DVD & HD-DVD

I did check the log file that the import created and The Mummy is listed. See Test419.txt

Can you verify this is what happens - just try to re-import an already existing title into your collection? If so, I can delete my existing database, merge all the XML files into one and do the import at one time and everything should be captured, but it would be easier if I could add just the missing movies and avoid killing all the work I have already done.

Also, I just realized that for TV show series it removed the season designation during import (Archer shows as multiple DVDs, but all are called just "Archer"). Is there a way to add the season designator (not episode) to the movies in my collection? Maybe under "Details"? Or would making this part of a pack allow me to designate the season? I see there's an "Episodes" field, but the choices are fairly random. Can I just populate that with whatever text I choose?

I didn't use another app, I had my collection in an excel file. So I saved the movies I wanted to import to a CSV. Then I used an online site (covertcsv.com) to create the XML file (using a custom template) and then imported that. Tedious, but only because I chopped up my collection into so many files.

As far as the music videos go, I think it would be a dozen or so.

I tried to upload the files, but everything except the jpg was rejected.

Thanks for the help. 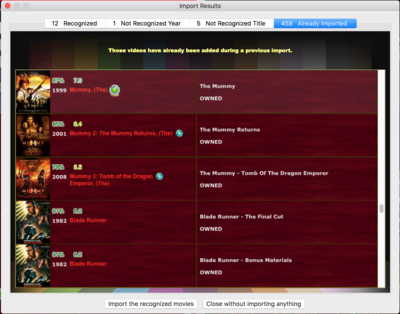 Ok, I see, if you want better results you'll have to import from another app like "DVD Profiler" or "Movie Collector". You should look at the structure of the XML those apps produce and convert your Excel file to that structure. Coollector knows the structure of those files and will import each video correctly.

Sorry it's not very convenient, but I've never had the case before of someone importing from an Excel file.
Post a reply
Switch to full style